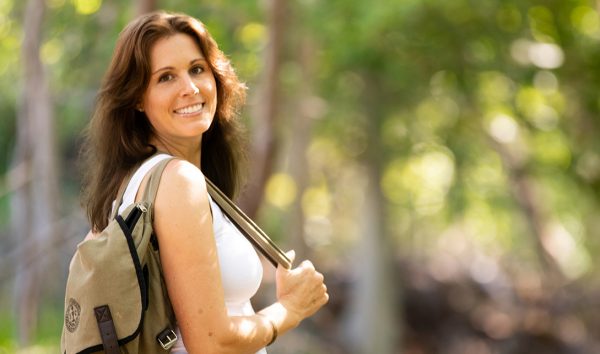 Lisa B has a B.A. in Visual Communications and a Master's Degree in Expressive Ecopsychology. When she's not recording, she's designing, painting, hiking, traveling, playing, and exploring all the nooks of her home base near Washington, D.C.

It’s the smell of a forest after the rain. It’s the sound of lapping waves against the hull of a ship. It’s the call of a loon on the quiet waters of a northern lake. It’s the lingering heat on the desert floor under a night sky tinseled with stars. It’s the chill in the air on a mountain peak above the clouds. It’s the romance of the day’s last sunshine filtering through thick summer air, bugs dancing and glinting.

Our planet offers opportunities for wonder at every turn. Yet, many of us no longer witness the natural world around us and the mind-quieting peace and reverence it brings. Whether we were brought up in cities with limited access to nature or have redirected our attention to a busy work and home life, as a whole, western society is suffering from what Richard Louv coined ‘nature-deficit disorder’ in 2005 (Last Child in the Woods). Louv first recognized the impacts of nature-deficit on children and later revealed its adverse effects on adults. He alerts that an “expanding body of scientific evidence suggests that nature-deficit disorder contributes to a diminished use of the senses, attention difficulties, conditions of obesity, and higher rates of emotional and physical illnesses.” Learn more about Richard Louv’s work here.

As a child, I imprinted on the woods of Maine, spending my days forging a big-wheel driveway around the trees near my fort and stacking shipping pallets for walls and benches. When I grew hungry, I climbed one of the near-by crab apple trees for a tart snack. On occasion, my sister and I would crawl through the tall field grass near our house, creating a complex maze of roads named Bluebird Lane and Huckleberry Way. When I was nine, we moved to Maryland, and I packed my love of the outdoors in my suitcase and took it to the rolling hills of Appalachia. Here, I spent much of my days with my friends and our dogs – hopping train tracks, exploring abandoned shacks, wading in streams, and cross-country skiing.

What did I gain from a childhood of getting lost in swampy forests after sunset? I cultivated problem-solving skills, I developed a love and empathy for the land and animals around me, and I grew to know myself. It would only be later in life that I questioned the latter, when things became more complicated and I reprioritized to fit conventions.

But not all is lost. Increasingly, park lands are emerging in cities. Organizations are offering opportunities for underserved urban youth to play in green spaces. And a local food-sourcing trend is encouraging at-home gardening and a reconnection to the soil. We are re-familiarizing with the very nature of which we’re part. Ecopsyched! aims to further our awareness of our connection to nature through storytelling.

And there is much we can do to heal our planet without neglecting our positive modern advances. The digital age is moving us further from printing on paper. Advances in solar power promise a more sustainable energy future. And smarter packaging and recycling give hope for cleaner lands and water sources.

We are learning. And as adults, we have the power and responsibility to instill appreciation for nature in our children so they do not set off into life with a nature-deficit. Read them a story under the stars, walk with them in the woods, play with them on the lawn and dig in the dirt. Have fun outside, for them and for you.

Lisa B is not trained in clinical psychology. Lisa B does not, nor does Ecopsyched!, advise as a medical professional. Information shared by Lisa B is rooted in her own graduate-level research and the extensive research and practices of professionals within the ecopsychology discipline and other environmental fields. Lisa B and Ecopsyched! advise anyone suffering with a psychological or medical condition to seek the help of a licensed medical professional.

Ecopsyched! travels the world to bring you stories about the human-nature relationship. To offset the carbon footprint of air travel, Lisa B makes every effort to contribute to, and make a positive impact on the local communities and ecosystems she visits. See episode details to learn more.

Copyright for all Ecopsyched! content – text, audio, artwork, photography, videos, stories – is owned by Lisa Barry, by Ecopsyched! participants where designated in written and recorded contracts, and/or by independent sources as acknowledged in recordings and show notes. Ecopsyched! original artwork and reproductions are property of Lisa Barry. Ecopsyched! content is prohibited for public use without express written permission from Ecopsyched!.

Stay in touch with Ecopsyched!